Last Sunday, I ran my 16th marathon - the Long Beach Marathon. It was the last race in my Beach Cities Challenge and I was really looking forward to it. Until I saw the weather forecast!

That's what it said a week out from the race. The temp forecast lowered to 90 a couple days later but it was still going to be really hot so the race issued a heat advisory and gave the half marathoners the option to start at 6am too. They were adding water stations and cooling stations to the course. I was happy to hear this but still pretty nervous about running in the heat. I don't do well in the heat ever since I had that heat stroke episode back in 2012 at a 50K at the beach. I do not want to ever end up in ER again like that! And ever since I had the full hysterectomy for ovarian cancer, I've had hot flashes and night sweats to deal with. Don't get me wrong, I'll take those any day over the alternative but it just makes hot runs more challenging. Especially staying hydrated.

Anyway, I tried not to worry about it. I just went about my regular routine of tapering, carb loading, and making sure I drank plenty of water.

PRE-RACE
On Saturday morning, I got up and ran an easy 5K then got ready and headed to Long Beach for the expo. I vowed I wasn't going to buy anything there but that was pretty much blown out the window as soon as I walked in the door. Oops. I bought shoes, a Fitletic phone pouch, and some shoe charms. But that's it!

Here's my shirt and bib: 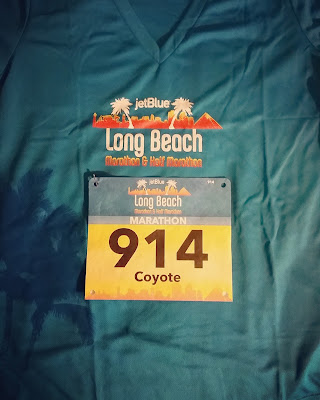 I saw my friend and fellow RIFer Sue at the expo. She was working the Fitletic booth. I also saw a couple of local runners at the LA Marathon booth (which I signed up for on Friday!). After that, I headed over to the Aquarium of the Pacific to meet Josh (@bayou) and his kids. The kids were running the 1 Mile Kids Run and I wanted to see them and cheer them on. First up was P in the 8 year old race and then later M (who is 4) ran in the 6/7 year old race. It was a lot of fun. The kids were so funny, some of them having a blast, some of them not so much. Lol. It was 100 out there! So hot for the kids. And me. I was hoping it wouldn't be that bad on Sunday. I caught a pic of Josh as he was trying to catch up with P in his race: 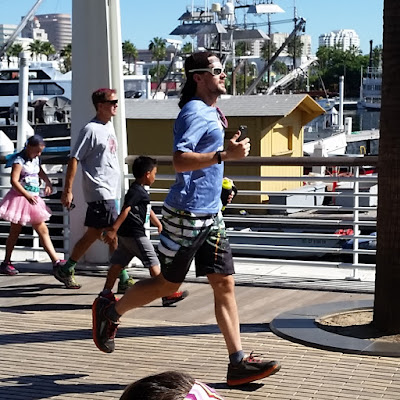 After that, we had lunch at Bubba Gump and then visited the Aquarium for a little bit. Then I headed home to get ready for Sunday.

I went to sleep pretty early and slept well so when the alarm went off at 2:45, I was up and a blur of motion. Eat, get ready, pack and then out the door by 3:30. I drove down to Long Beach and was there by 4:20 so I had plenty of time to park and use the port-a-potty. They had a ton so there were no lines at all.

I sat down and waited and then found Josh and we found some other RIFers so we hung out in the corral until it was go time.

THE RACE
I wish I could say I raced this but I knew I had to be smart. The race started a little late and by the time we made it to the start it was 6:15. And we were off! I ran with the others for a while then lost them in the crowd. It was a little bit crowded since so many half marathoners were with us but it wasn't too bad. I just ran at a comfortable pace 9:45-10:00.

I saw Josh again a couple miles in as he'd stopped at an aid station. He wasn't carrying water but I had a bottle filled with tailwind. I also had salt tabs with me. Since I knew it wasn't going to be a fast race, I stopped to take this pic as we came around the lighthouse. What a great view! 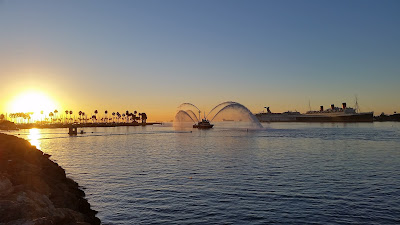 After that, I just ran. After the sun came up, it started to warm up and I started to slow down. There was no shade and I was so hot and sweating like crazy. I started to do a run/walk probably around mile 12. It just got hotter and hotter. And hotter. It was blazing! So in the last half, once again, I did more walking than running. I felt my ears start to plug up and would get a little woozy and make sure I walked. At every aid station, I would drink water and then pour the rest over my head and on my arm sleeves.

I saw Josh again when I was around mile 16 (going in the opposite direction so he was past mile 20) and it was good to see a friendly face. I knew probably a dozen people running the full & the half but he was the only one I found on the course. The aid station volunteers were pretty awesome and friendly too and at one point 3 of the little cheerleaders (probably 10 years old) ran with me for a bit and told me I was doing great. Lol, they were awesome.

There were a lot of people walking and stopping because of cramps. Luckily, I never cramped even though I wasn't as diligent about taking the salt tabs as I should have been. Pretty much, I was more walking at the end but did finish with a nice little run. I was so happy to hear the finish and then see the finish line!

I was done! A slow as molasses 5:50ish but I was done. And I felt pretty good. This is my medal: 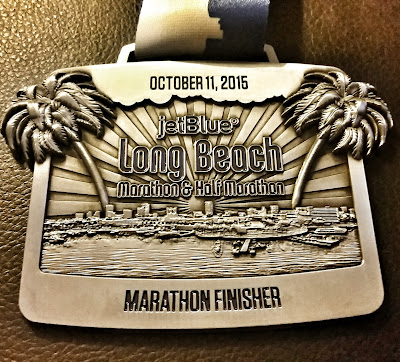 And this is my medal for completing the Beach Cities Challenge (Surf City, OC, and Long Beach): 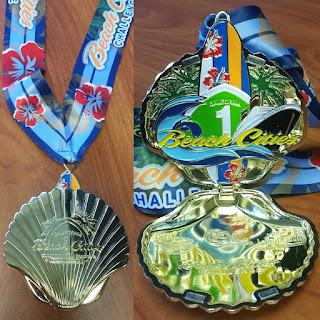 After the race, I found Josh and the other RIFers and hung out for a bit. Then we got something to eat from one of the food trucks. I was so hungry! And since my stomach hadn't had any issues at all, I went for something yummy: 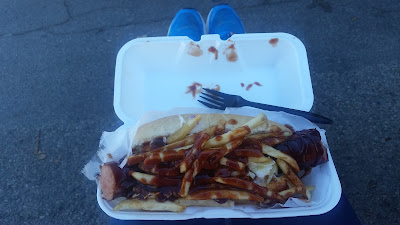 Yeah, it was good. It hit the spot.

Oh yeah, you can see my shoes peeking out in the pic above. Yes, those are my new shoes I bought on Saturday! I couldn't resist wearing them. Here they are: 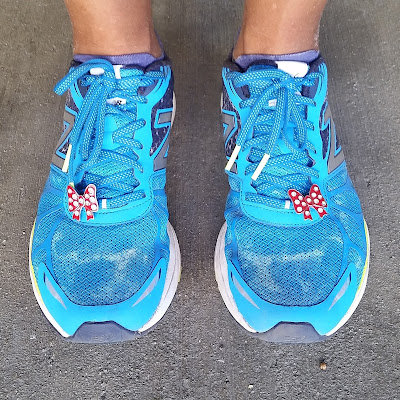 All salty from the marathon but still looking good. And how cute are those shoe charms? I love them! And the shoes too! No blisters and no hot spots. Woo! They are the new Vazee Pace by New Balance.

So, to wrap it up... I would say this was a good day. I was irritated with myself a little for being so cautious and taking so long but I am happy that I finished without getting sick or needing medical care. Long Beach is a great course, lots to see and really no hills. There isn't a lot of crowd support but I was okay with that. I would definitely do it again. Just hopefully on a cooler day.

P.S. Josh interviewed me about my weight loss, running, and cancer a couple of weeks ago. It's on youtube and you can see it here if you would like. Interview.
Posted by Lisa at 3:15 PM