On Sunday, I ran one of my favorite races – The Snoopy Coaster Run 10K at Knotts Berry Farm. I love this race because I LOVE Snoopy and the medal, shirts, and bib have Snoopy on them! Woo!

The last time I ran this race was in 2013 and I wasn’t in speedy shape. It was in that period where I was so tired and thought I was overtrained but later found out it was because of ovarian cancer. I wanted this race to be…not a revenge race because I’m not giving cancer that power over me…but a redemption race. I have done 11 10Ks now but had only raced them twice before. I mean really, really raced. I felt good and strong going into this and was hoping to lower my PR I’d set at the Santa Monica-Venice Christmas Run 10K back in December. This course was flat but curvy and with a few u-turns in it but I felt like I could run well here. 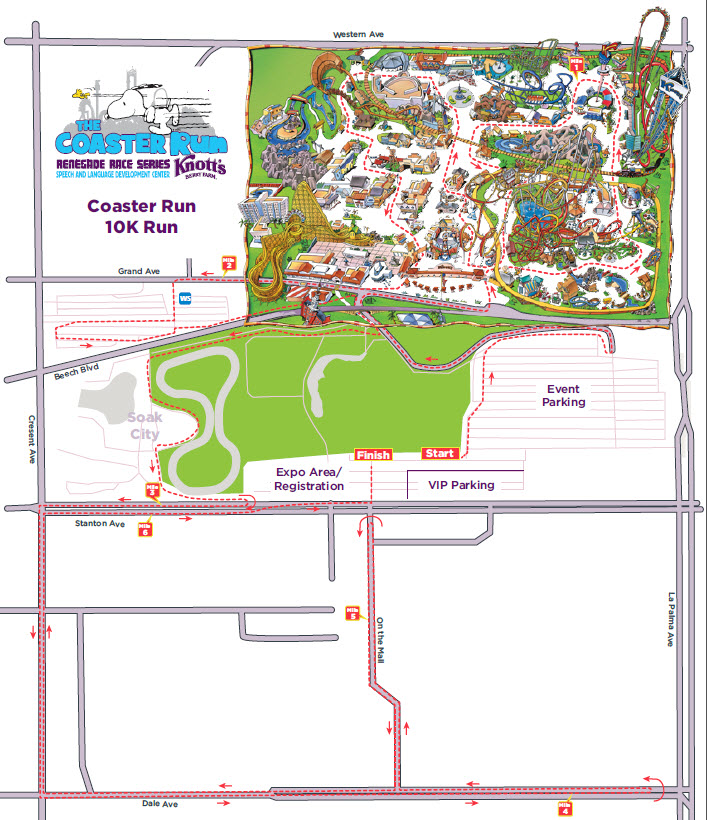 As you can see, we get to run through the park for the first part but then take to the streets for the second. Which works well for me because I can focus more in the second half!

The race was supposed to start at 8 but we received an email a few days before saying it was moved to 7. Woo! Perfect! We also received our bib numbers and corral assignments. I was bib 612 and I was in corral 1. A perfect PR Storm was brewing. 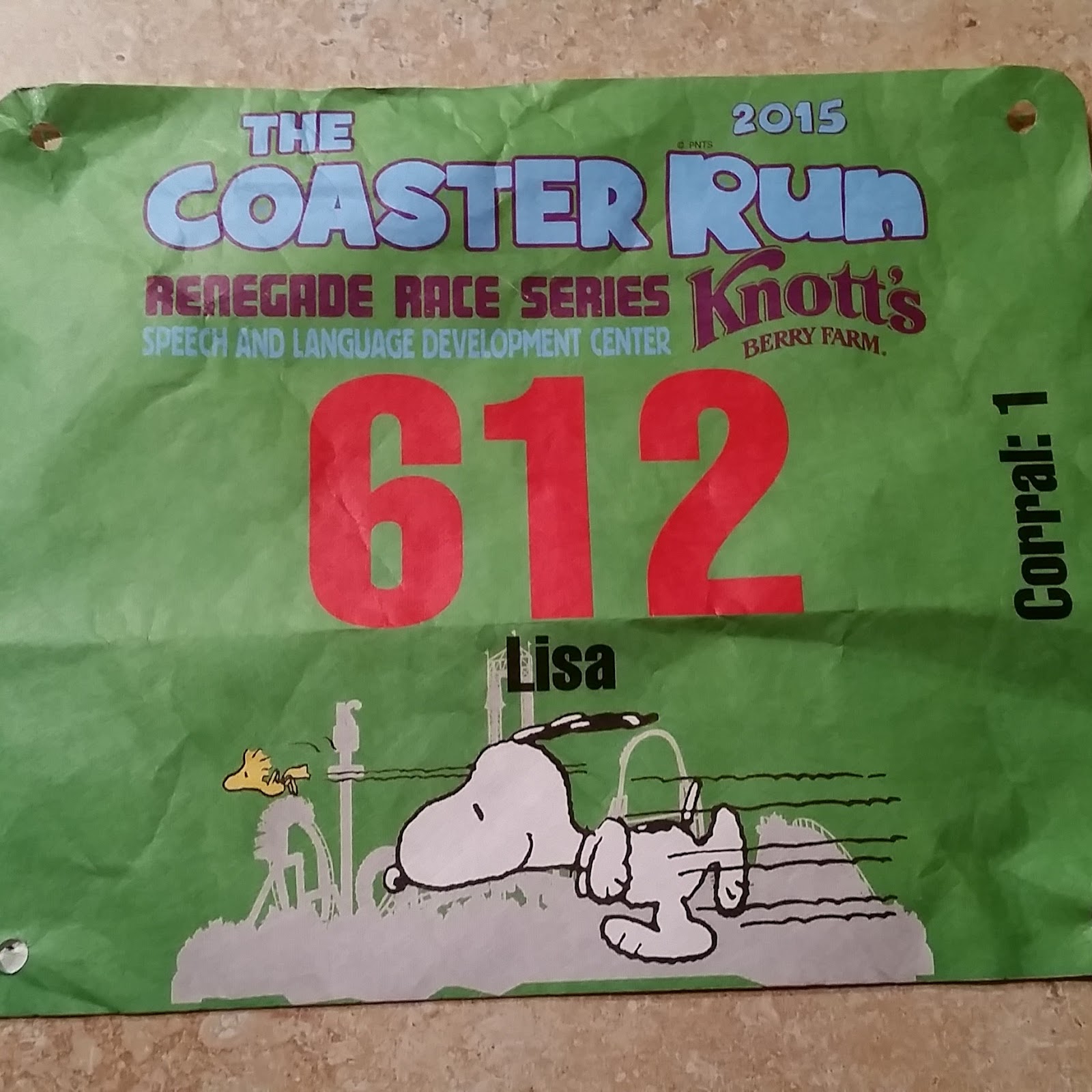 Isn't it cute! And it's green, my favorite color! I'm telling you the stars were aligning for a really good race.

Even though the time had changed, I had no trouble getting up at 4 on Sunday. I ate breakfast, got ready, and then drove down to Knotts Berry Farm. I got there just before 6 and got my bib and chip and went back to the car to get ready. I wanted to do a warm-up so I ran for 2 miles around the parking lot. I also had a gel 15 minutes before the start. Then I got into my corral to wait.

Before you know it, it was 7 and they were doing the pre-race activities and then it was go time! One of the cowboys from Knotts started us off with his shotgun! We were off! I think I ran pretty smart from the beginning. I tried not to look at my Garmin but did glance at it when we hit the 2 mile marker. I saw that it said sub 16 min on my watch and was like "Uh, oh". Maybe I shouldn't have looked at all because not soon after that, I started getting a stitch in my right side so I backed off a little to try and work it out. This mile was my slowest, just under 9 minutes. I think maybe I psyched myself out a little.

Once we hit 3 miles though, I picked it up again. I settled into the pace I'd planned to run and tried to keep 2 guys running at similar pace in my sights. Those miles were pretty uneventful. We passed the 4 mile marker and then the 5. Just as I passed the 5 mile marker, I reset the lap on my Garmin so I would know how much exactly was left. I looked at the time that had elapsed and started calculating my finish time in my head. I was surprised to figure out that I might make it around 52 minutes. I was hoping for under 52. I did not have the extra gear I'd hoped for at the end though. And I didn't take into account my garmin being off because I hit 6 miles, and then .21 miles under 52 but I still wasn't done!

But then there was the last turn to the finish! I saw the clock and knew I had finished just after 52 and was pretty excited. I just needed to see the results to see what my official time would be.

I got my super cute medal: 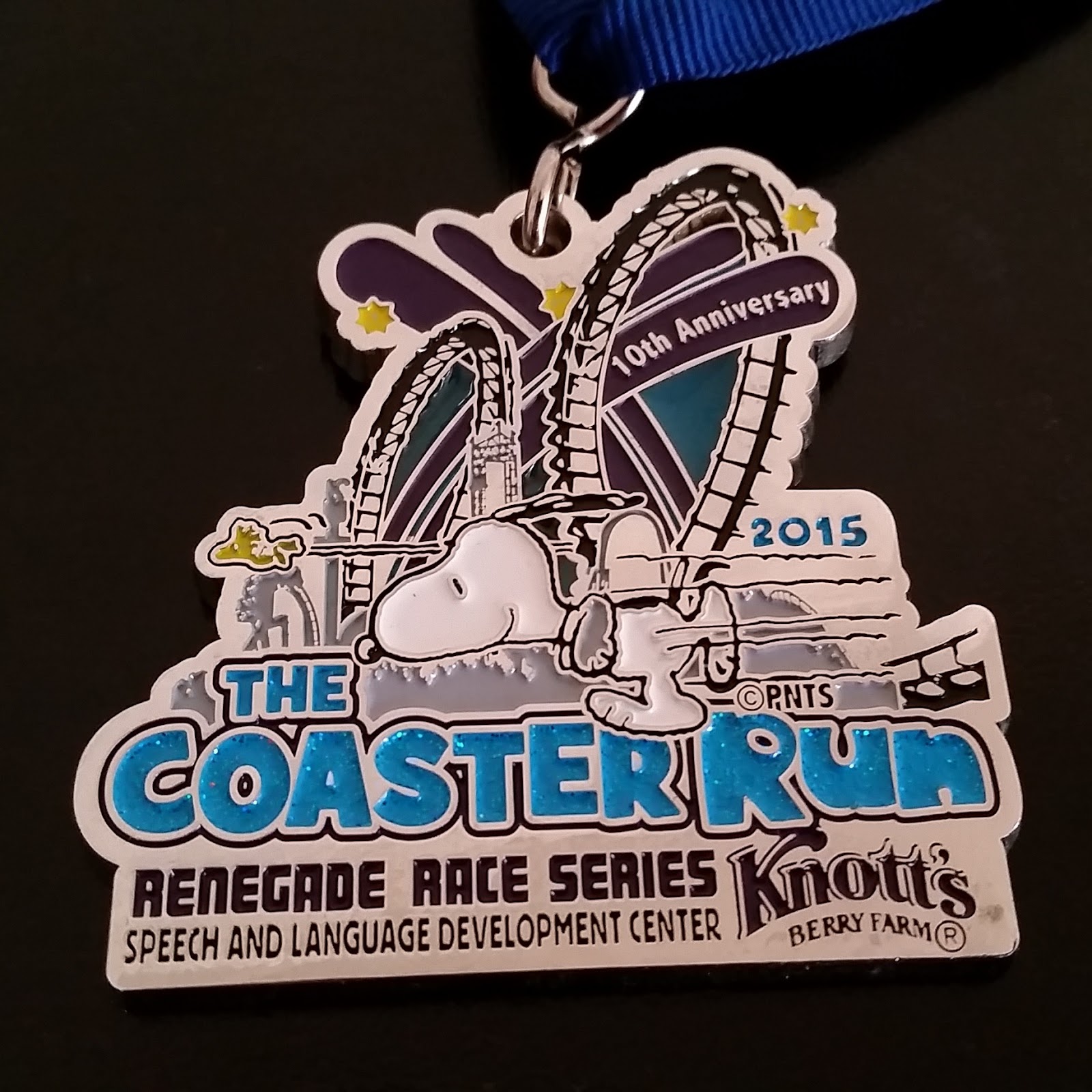 And then my boysenberry pie! Which is so yummy and perfect for a post-race snack (along with the chocolate milk) while I waited for the results. 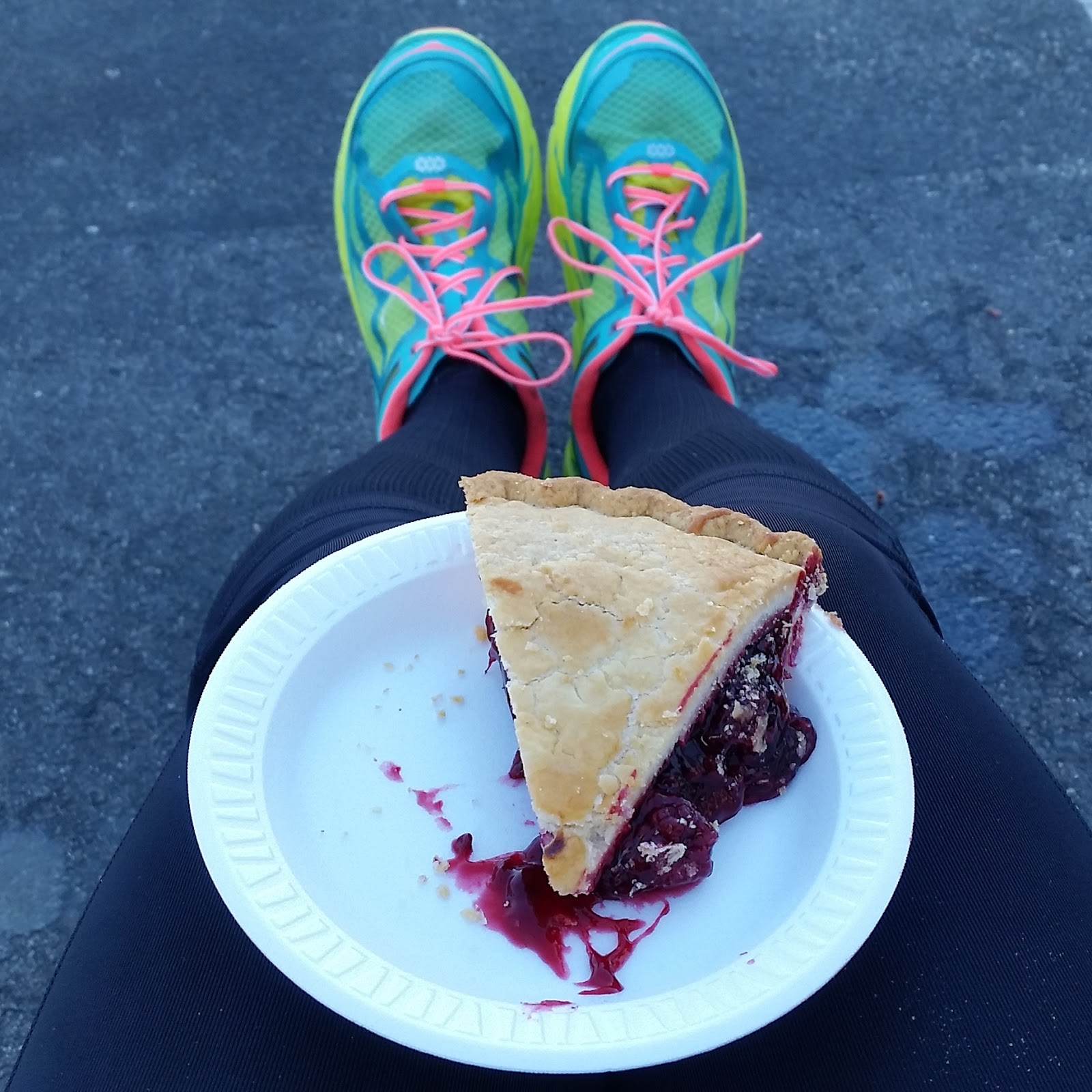 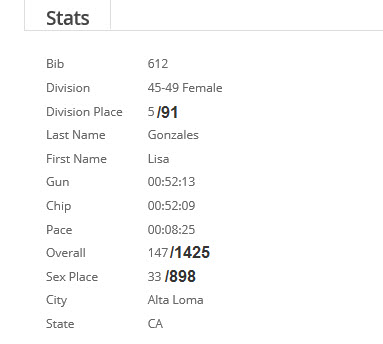 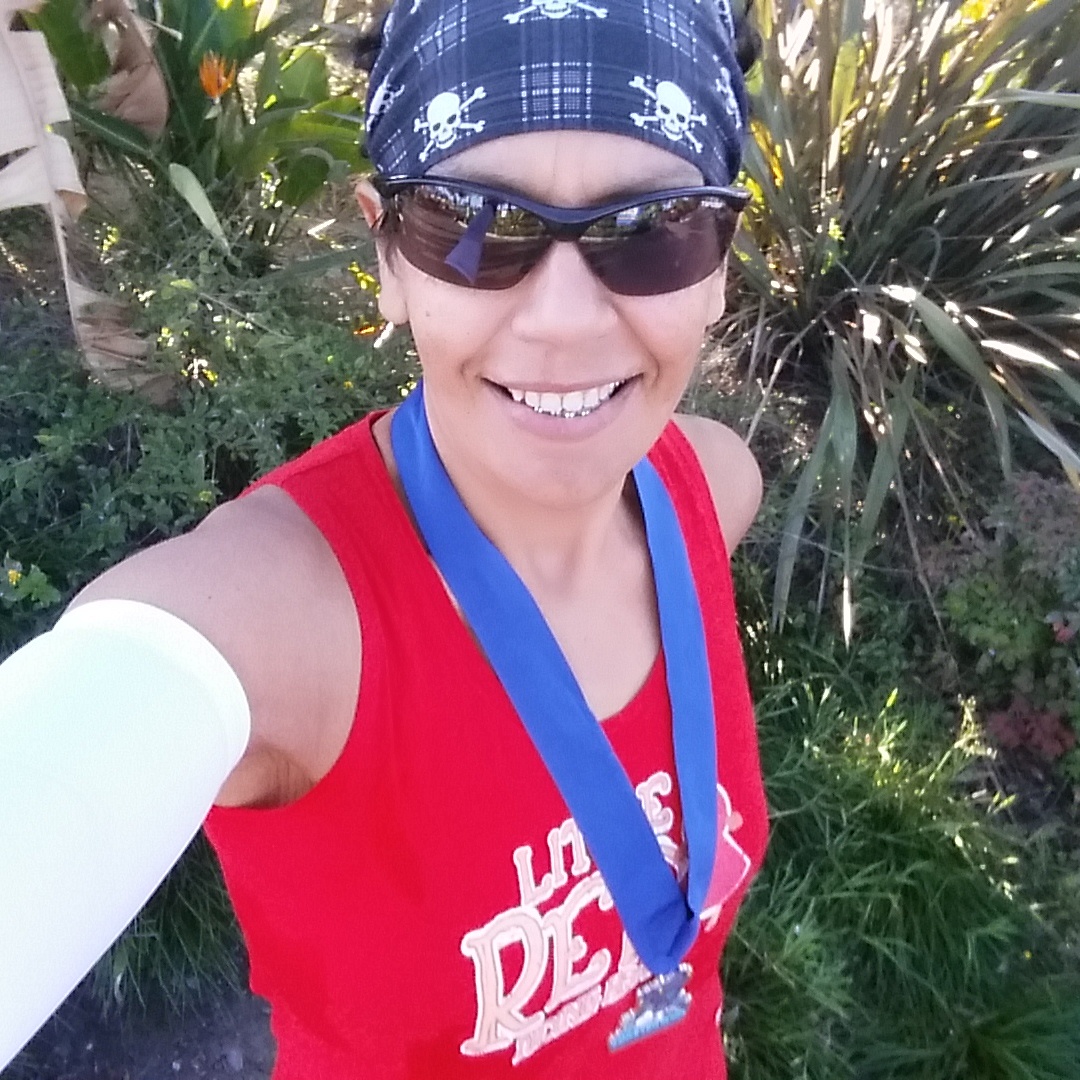 So, I am very happy with this race. I love that for the 10K, I set a real PR and not just a post-cancer PR. It’s the only race distance I can say that about. For now. :) I hope there will be more to come!

Of course, in thinking about the race, I’m sure there is something I could have done better.
All in all, I think this was a fantastic race for me. I set a PR and learned some things about racing a 10K that I can use next time.