On Sunday, I ran the Girls on the Go 10K at Bonelli in San Dimas. I ran it last year and it was pretty fun. I decided to run it again this year at the last minute. My coach had scheduled a 20-22 miler on Saturday and we decided to go ahead and do that. I ended up doing 20 miles on Saturday so that, plus a hilly course, and a heat wave meant that I went into it not expecting a PR. But my goal was to place in my age group.

Packet pick up was on Saturday and I was pretty proud of myself for not buying anything there! LOL. We got a nice shirt and our bib and that was it. No frills which is fine with me. 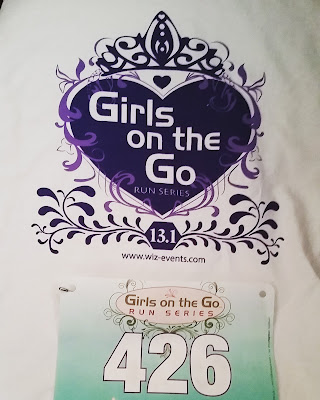 I set my alarm for my usual 4 am wake up, got up, ate breakfast, and got ready. I decided to wear my Brave tank & headband since they are teal so I could honor Ovarian Cancer Awareness Month. It will be 2 years on Sept 30th that I was diagnosed with Ovarian Cancer. 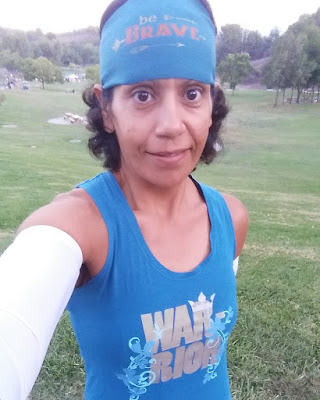 My legs felt pretty good on Sunday morning and I didn't feel too tired so I thought I would do pretty well. It was warm already though (at 7 am) so I just did a short warm up. I didn't want to get overheated before we started! The kids race went off first, so I stopped to watch that and then continued my warm up.

The race went off promptly at 7:15. I had placed myself near the front so I didn't really have a crowd. We started off with an uphill and I may have gone out a little too fast. LOL! I always do. But I don't think I went too crazy. There were probably a dozen people in front of me. We made the turn to follow the lake and went up a little hill and onto some dirt. Then it was a smooth run along the lake until we crossed the stream. Another stretch of dirt here but it was cool under the trees. Right before the 3 mile marker, I was passed by a couple of women. Darn it! And then we had a short out (uphill) and back (yay for downhill). This was a nice section because you could see who was ahead of you and who was behind you. I felt like I was in a good place if I could keep going strong.

After mile 4, I heard footsteps coming up on me and I was passed again! This time by a guy. Doh! But after that, no one did. We had one a big climb, then a good downhill, then a smallish climb and then it was slightly rolling to the end. I feel like I finished strong. There was a woman up ahead of me that I tried to catch but never did. Then I finished! And got my pretty sparkly medal: 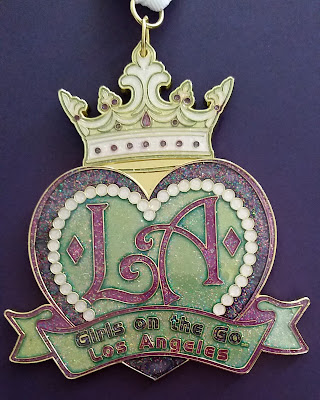 I cooled down and talked to one of my Fleet Feet friends for a bit and then saw them put up the results. So I ran over to check them out. Having seen who was in front of me, I thought there was a good chance I would place in my age group...and I did! Woo! Surprise, I was 1st in my age group! Woo hoo! 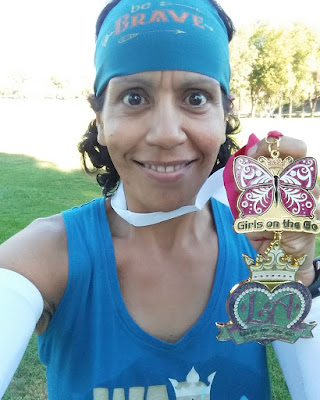 This is my Age Group medal and the results below. 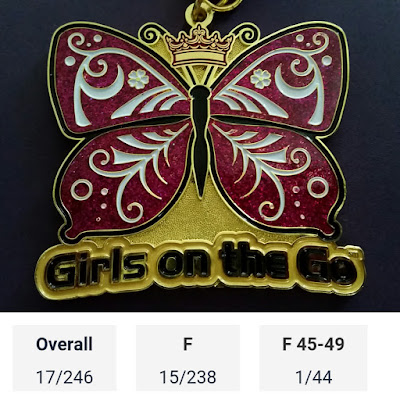 Not too bad considering I ran this on tired legs! I know that there are a lot of first timers and a lot of women doing it for fun but I'm still happy with this. Woo!

Thanks for reading!
Posted by Lisa at 3:18 PM