The Terrifying 10 Miler was my 100th race! 100 races! Who'd have thought that the girl who spent most of her life out of shape would run 100 races. Here's the stats:

Yes, I'm a geek and I keep track of my races in an Excel spreadsheet.

But back to the Terrifying 10 Miler...

The race was held on October 25th at Salt Creek Beach in Dana Point. We could get our bibs on race morning so I drove down that morning. It was dark when I arrived and after I got my bib and shirt, I walked down to the beach to watch the sunrise. So beautiful! 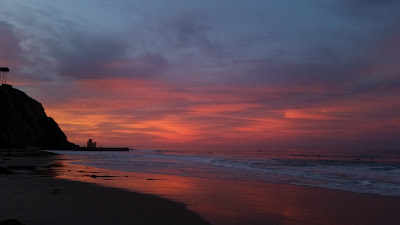 Then I went back to the car to drop off stuff and finish getting ready. I only had time for a short warm up before the race started since the restroom line was long.

The race started at 8am. We only ran along the water for a little bit and then turned inland. And BAM... hills right away. I have got to look at elevation profiles before I sign up for races! It was a lot of rolling hills, a couple of short steep sections, and one big hill at the turn around.

I felt okay for the run. My legs didn't seem to have a lot of pep for the hills but I think I did pretty well running hard on the downhills. My coach had wanted me to run it at 8:45 pace but that didn't happen. I only walked one tiny bit of one hall to adjust one of my socks but otherwise, I ran it all. I tried to focus on running the downhills hard to prep for RCC Marathon which is all downhill.

A few people had passed me in the middle miles and I was able to pass 2 of those women back at the end. There was boy and his dad who I tried to catch at the end which helped me run hard but I couldn't catch the Flash (the 10 year old's costume) and he beat me. Argh! Oh yeah, I was dressed as a pirate! Lol! My time was 1:37:19. So about a minute per mile slower than I'd hoped. Sigh.

I got my medal... but wait, a Turkey Tri medal? 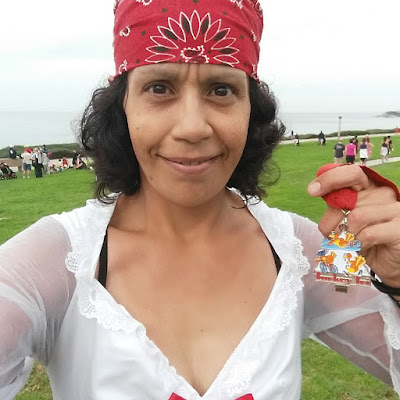 The trick was on us! Our medals had been delayed in customs so they handed out random medals to runners. Some people got Christmas medals and some people got Thanksgiving medals. It was kind of funny. After that, I waited around for the results to be posted. I knew there weren't that many women in front of me so I was hoping to place in my age group because the Age Group awards were cute! And boom! 2nd in my Age Group! Woo! 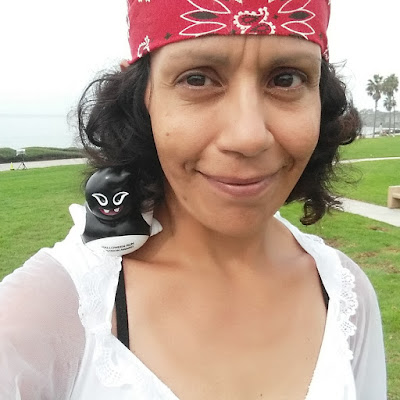 Some pirates have a phantom rubber ducky on their shoulders instead of a parrot. 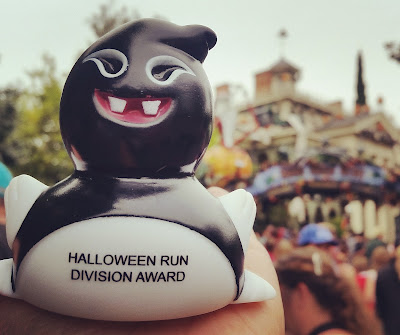 Close up of the AG award in front of the Haunted Mansion (where else would I celebrate?). 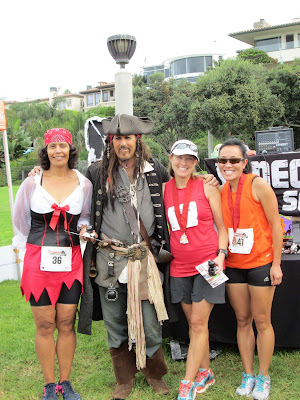 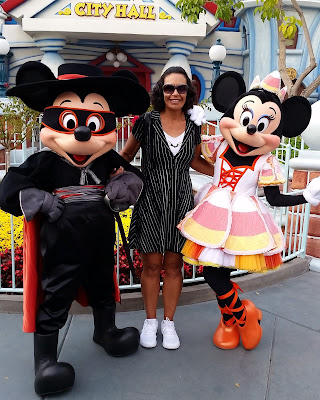 It was a fun-filled Halloween themed day. I love Halloween! Speaking of... I got my actual medal for the race in the mail on Halloween, which totally seemed appropriate. Love it! 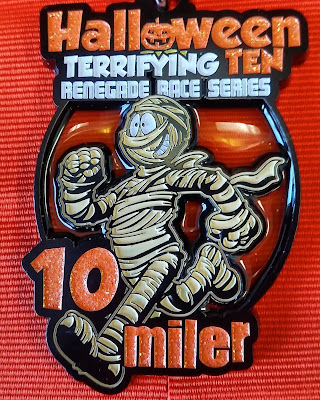 Thanks for reading! Hope you were able to do a fun Halloween run and dress up!﻿
Posted by Lisa at 3:13 PM