On Saturday, I ran my 22nd half marathon - the Hollywood Half Marathon. It was our chance to "run with the stars". :)

Because the race started so early on Saturday and there was no bib pickup before the race, we had to go to the race expo on Thursday or Friday. I went with my friend Heather to the expo on Thursday. It was small, but fun and we got a chance to rub elbows with the stars" 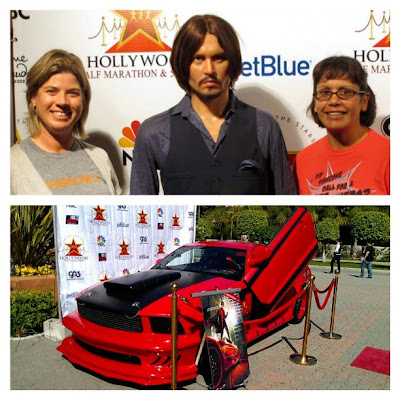 I was a little worried Johnny would melt when he saw how hot we were but he survived. :) The car in the bottom half of the pic is from the movie Kick-Ass and was the race pace car. I made it out of the expo with my wallet intact and got my shirt and bib. My bib: 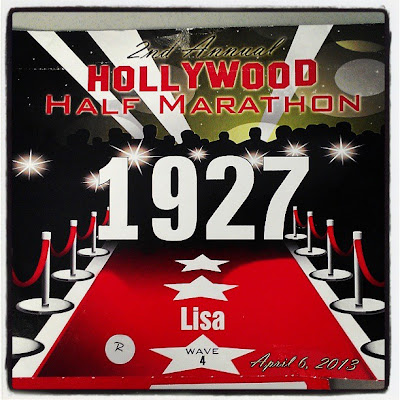 Apparently, I was going to be one of the stars. :)

PRE-RACE
Because the race started so early on Saturday, I went to bed early on Friday and set 2 alarms for 2:30. I was a little worried that I would sleep thru the alarms but I didn't. I ate my usual pre-race breakfast: a bagel, banana, and orange juice and got ready.

I left my apartment at 3:40 and drove over to Josh's (@bayou) to pick him up. We found parking pretty easily and then headed to the start. While we were making our way over to the start, I saw Heather so we stopped to talk for a bit. We left her to find the port-a-potties and surprisingly, there weren't any lines. We found Heather again after and then left to find some of the Run It Fast Club members. We found RIF #244 Susan and her husband Kevin and took a quick pic before we headed to our corrals: 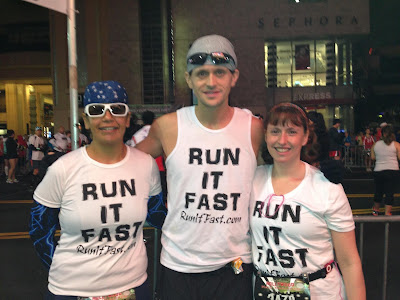 THE RACE
There was a a 5K, a 10K, and the half going on and they all started together. The race started promptly at 6 and the corrals moved thru pretty quickly. It was a tiny bit crowded at the start but not bad at all. I thought the crowd might force me to take it easy but nope, I went out pretty fast. Oops. :)

The crowd got even thinner as we lost the 5Kers at their turnaround and then the 10Kers at their turnaround. It was fun because we got to see the fast people for both. Usually, they start later so you never see them. What was really cool was seeing that a woman was in first overall in the 5K. She was flying! Women rock! (She did win the whole thing too. Her name is Joy and she's 37! - so cool). When I saw the fast 10K people, I started looking for Josh who was doing the 10K. I saw about a handful or so of runners and then there was Josh! He was flying too and I knew he was going to place really well.

Until we split with the 10Kers, we'd had a slight downhill most of the way. It meant my times were faster than expected. I'd hoped to finish around 2:15-2:20 and my times for the first 4 miles would have put me around 2:10 if I kept them up. I didn't look at the course map though and didn't realize we had some hills on the course. A couple of steep sections too. So I did slow down a little after mile 5.

My energy was pretty good until around mile 9 and then I felt my energy drop big time so I ended up taking Gatorade at 2 of the aid stations. I had thought about grabbing a gel earlier because I realized I'd left my Honeystinger waffle in the car but knew eating a gel was just a disaster waiting to happen. I thought Gatorade would be the lesser of 2 evils and I kicked myself for only carrying water and not GuBrew. But it wasn't too bad of a bonk.

I had my phone with me but didn't take any pictures of the "stars". They had told us in the race email that if we saw a "star" on the course, to not stop them and ask for autographs. I don't know if any famous people were there but I did see some fun costumes. There had to be at least a dozen Marilyns and the Lucys were awesome.

What was even more fun was getting to see some friends from Instagram on the course. I got to "meet" Tony and then I ran with Ian for a while. Seeing both of them gave me a little extra pep. :)

I looked at my watch and saw that it was going to be close to 2:20 when I finished. And then I saw that I was ahead of the course by 2/10ths of a mile. Oops. Did a bad job of running the tangents...again. So I got my rear and gear and started running hard to the finish. Just before the last turn to the finish, I heard Josh call my name and seeing him was a great boost. Then I turned the corner and there was the finish. I crossed the line with Marilyn Monroe! Only sucky part was she got all the glory. What a scene stealer! Sheesh! ;) 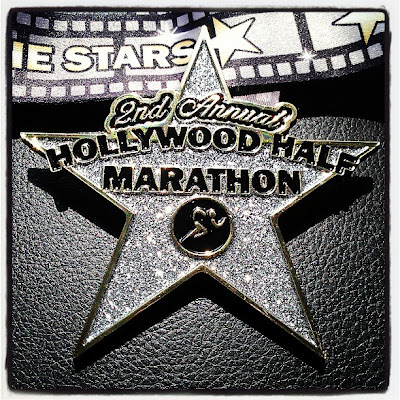 POST RACE
Once I made my way thru the finish area, I went and found Josh. We found Susan and Kevin again and then Heather and got to visit for a while which was fun. Then we made our way back to the car with one little stop at Crumbs Bake Shop for a sweet post-race treat: 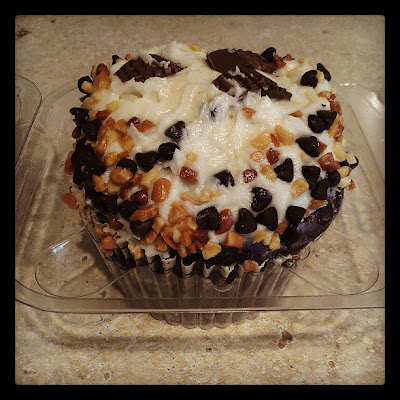 A peanut butter cup cupcake is the perfect way to celebrate a race! Thank you for my cupcake Josh!

Just a couple of things...I didn't carbo load or taper for this and I have the Griffith Park Trail Marathon this coming Saturday so didn't want to leave everything out there. I think I ran it smart and I'm happy with the way I ran this race. I'm learning to suffer again and run hard. Racing is finally fun again. :) Woo!