Well, maybe not. But I did reach a milestone in my runstreak today! 300 days of running! 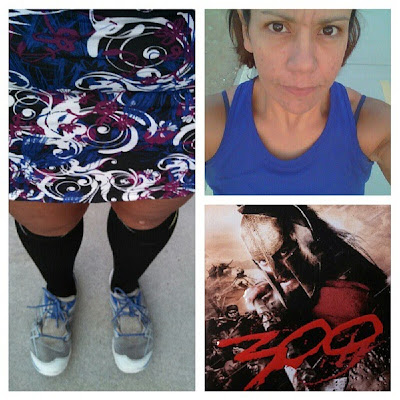 I wore my Skirt Sports Celebration skirt to mark the occasion during my 5K run this morning. :)

My first runstreak only got a little past 100 days so I wasn't sure how this one would go but so far, so good. There have been days where I've had to do a one mile "streak saver" when I was sick or body parts were hurting but for the most part, I've done at least 5K a day for my streak. :)

There were a couple of times that I thought about giving it up...like when I had the flu back in April. Sometimes it feels like a burden but mostly it is incentive to get out the door. There were days when I just didn't feel like running and the streak was the only thing that got me to put my shoes on.

I'm not sure how long it will go. Josh was asking me if I was going to continue past a year and I hadn't really thought about it. Sometimes I think I'll just keep going and then sometimes I think that I'll stop at a year. A year is a good stopping point. But I really do like running every day.

I'm just hoping that what ever is going on with me won't kill my streak before the year is up. Some days are a struggle right now but at least I'm running.

I haven't been writing in this blog much because I felt like all I could do was whine. I just couldn't get why I was having crappy runs and races all the time. I was VERY frustrated with myself and my running. It seemed no matter how many steps forward I took, I'd take 2 steps back. I would watch everyone else continue to PR and go farther and I would be jealous. Why wasn't that happening with me?

Looking back, I can see that I was feeling some of these symptoms for more than a few months. And now that I think about it, when I fell during the R&R San Diego Half that my back and stomach were hurting...it must have been this. I thought I'd landed on my arm or something but I realize now I didn't. Also, how I wasn't having fun running downhill because it would bother my stomach...same thing. Feeling out of breath when I'm not running that hard...ditto. Taken individually, they didn't seem like that much but I did know something was wrong for quite a while. Mostly, I just thought I was tired. Or some people suggested I was overtrained. But I didn't feel like I'd been doing enough to be overtrained!

So I talked to my coach last week and we decided I would take the month of August off from training. I'm still going to keep up my streak and try to maintain but nothing hard or too long. The funny thing is that now that I know there IS something wrong and that I'm not trying to hit the hard workouts, I feel more relaxed about my running and a lot less frustrated. It still makes me a little sad that sometimes I run 12 min miles. I miss running hard. But at least I enjoy them again and don't dread putting on my running shoes.

Personally, I've felt calmer this past week too. I still don't know what it is but suddenly the stress of work and other obligations I have doesn't feel so important anymore. I feel...relieved I think. Hopeful. That I'll finally figure out what's going on, fix it, and get back to feeling strong and healthy again. :)

I know it's vain but other than the aches, the only thing that's bothering me is my stomach. I feel puffy. I keep waiting for someone to ask me if I'm pregnant. :( Sigh. It's probably not that big. It just feels like it. 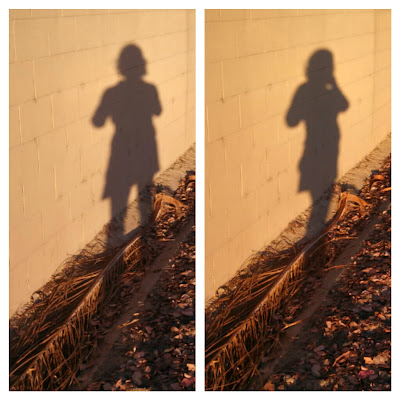 Pics from my run this morning. I'm a nut, I know. But doesn't it look like I could be?

For the past few months, I have been feeling nauseous. Mostly in the morning but sometimes throughout the day. It wasn’t terrible so I didn’t do anything about it.

About a month ago, I started feeling like I had a hamster bladder. I felt like I had to go all the time, even if I just went.

And then last week, my stomach started hurting. And there was a bump there. It felt like I’d eaten a really, really big meal and was very, very full. I like to sleep on my stomach and suddenly, that was painful. I kept thinking “but I didn’t eat that much”. I didn’t know what was going on but it bothered me enough that even Spike lying on my stomach was an issue. Poor kid has been shooed away since and doesn’t know why.

I kinda thought maybe it was an ulcer or maybe IBS. I thought it was stress that was making me feel nauseous and tired.

I started noticing that I didn’t have that extra speed gear when I ran. Pretty much the entire month of July I didn’t have that gear and it was really frustrating. I wasn’t coming close to the times my training called for with speedwork. The pace that I ran a 5K back in June suddenly felt impossible to hit for an 800. What the heck was going on?

But it wasn’t until it became uncomfortable to run that I decided to go see a doctor.

I was nervous about it. Especially at night in the dark. Sometimes I would think I was overreacting and that it was nothing but then I would feel my stomach and get a little scared.

So I went to the doctor yesterday. She asked me all the usual questions. She said had I been on any trips lately. I said only to Kentucky and Tennessee. She said she should have said trips out of the country and I said for a SoCal girl, it did feel like another country. ;) (I’m kidding! I totally love TN and KY and all the people I’ve met there but it IS very different from SoCal!).

She asked me my family history and I think with the symptoms she was thinking it was my gallbladder. Then she had me lie down so she could feel my stomach and the conversation went like this:

Doctor (with a small smile): “Could you be pregnant?”
Me: “No.”
Doctor: “You’re still having your period…are you sure?”
Me: “Not unless it was an immaculate conception.”
Doctor (no longer smiling): “Well, you’re uterus is enlarged so I’m going to have to send you for an ultrasound to figure out what’s going on.”
Me: “Okay.”

But really inside I’m thinking “NOT FAIR, NOT FAIR!” The only real regret I have in my life is that I did not have a child. And here I am having crap go wrong inside me that’s simulating a pregnancy (nausea, having to go all the time, a round belly) but it’s not something joyful and happy like that. :( It pisses me off! Why Fate, why?

So we talked possibilities of what it could be based on my family history (fibroids or maybe cysts) but she said she really couldn’t say until she saw the ultrasound and I had some blood tests. I’m having the blood tests today but couldn’t get in for an ultrasound until the 18th.

I guess fibroids would be the best case scenario. I don’t really know. My mom and grandma had cysts and had an ovary removed (mom) and a hysterectomy (grandma – who also had cysts on her liver and kidneys which ended up with her on dialysis). But there's no use wondering until I know for sure. Except I am. How do I stop that?

The thing that bums me out is that I have to wait so long to find out what it is. And will my stomach continue to grow? Will it get worse? Will it get to the point where it hurts to run instead of just being really, really uncomfortable? At this point, I don’t even want to eat anymore except I am eating to fuel my running. I hope that gets better because you all know how much I love burritos! And pancakes! And ice cream!

I can’t see it getting better miraculously on its own. Though I suppose that could happen. But probably not.

I don’t know what I to do about my running at this point. I was supposed to be training to BQ at the Big Cottonwood Marathon on Sept 14th. And then I have Long Beach Marathon and R&R LA Half Marathon in October. And the Flying Monkey Marathon is having their lottery this week. But this is how bad it is that I was supposed to do a 16 miler on Saturday and I was thrilled when my coach said to do just 10. Of all the types of runs, I love long runs the most but have no desire to do them right now.

I offered my entry into Big Cottonwood to Josh and he’s going to take it and I decided not to enter the lottery for the Monkey. I am also thinking of dropping to the half at Long Beach too. I don’t want to miss that one because I need it to finish my Beach Cities challenge and I don’t want to miss R&R LA because…have you seen the medal? But right now the thought of running a marathon just exhausts me.

I feel like I’m in limbo right now. Do I continue to try to train hard or do I go into maintenance mode? Honestly, sometimes in the morning I don’t feel like running but the only thing getting me out the door is my runstreak (day 296 today!) and my coach. But should I continue with my coach if I’m not in a place to train hard for anything?

What should I do?

I keep telling myself to suck it up and just run and quit whining. But is that the right thing to do?